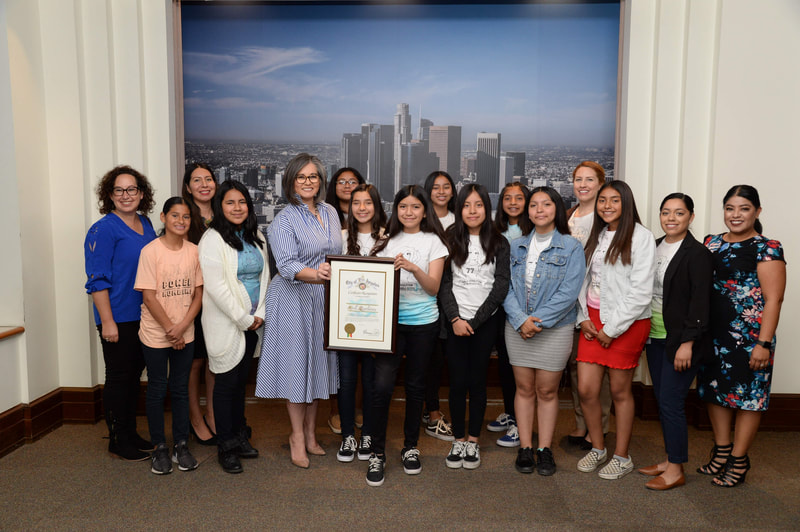 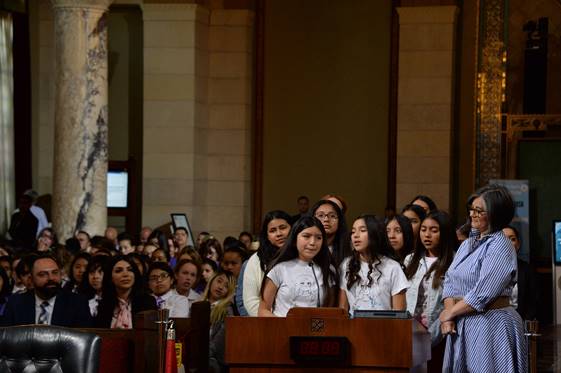 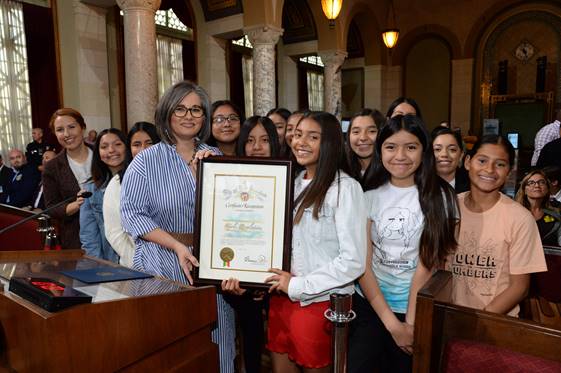 As a group we had the opportunity to speak on the issues that affect our homeless population and to share our ideas in front of 15 councilmembers and 160 audience members.
Baby Hygiene Drive 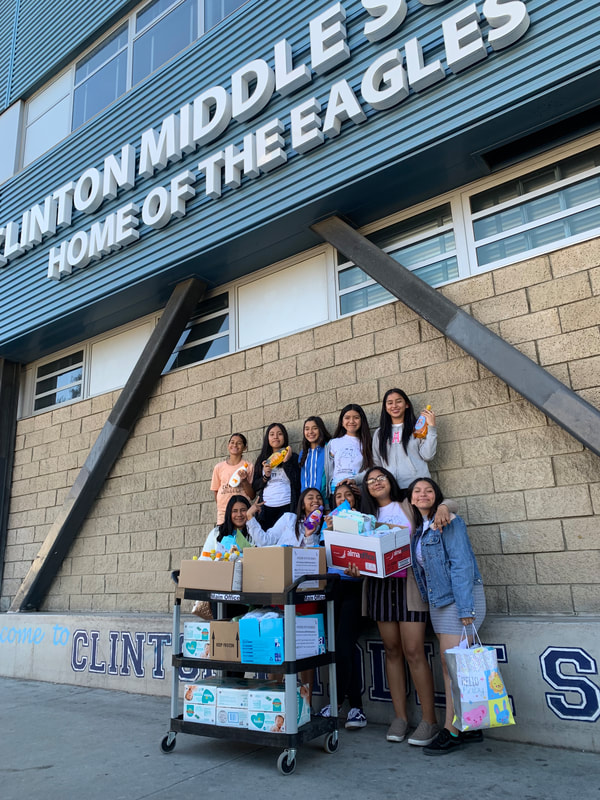 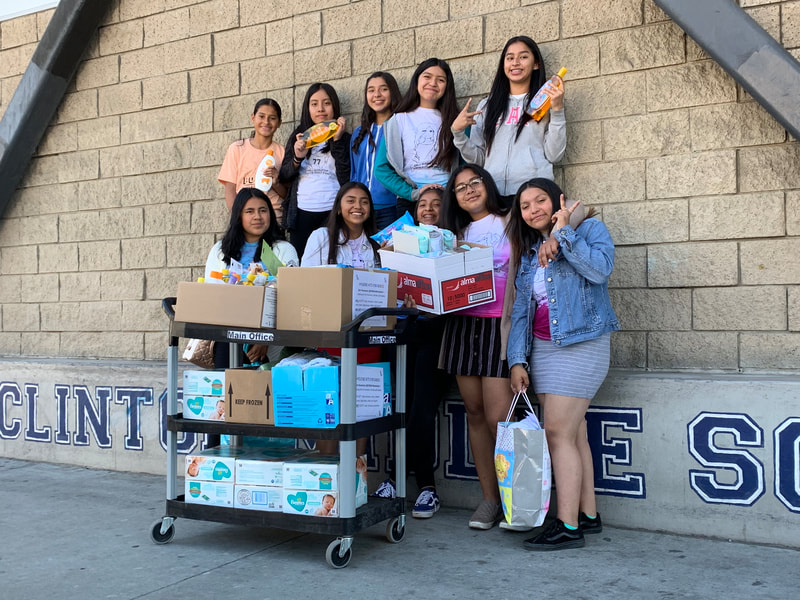 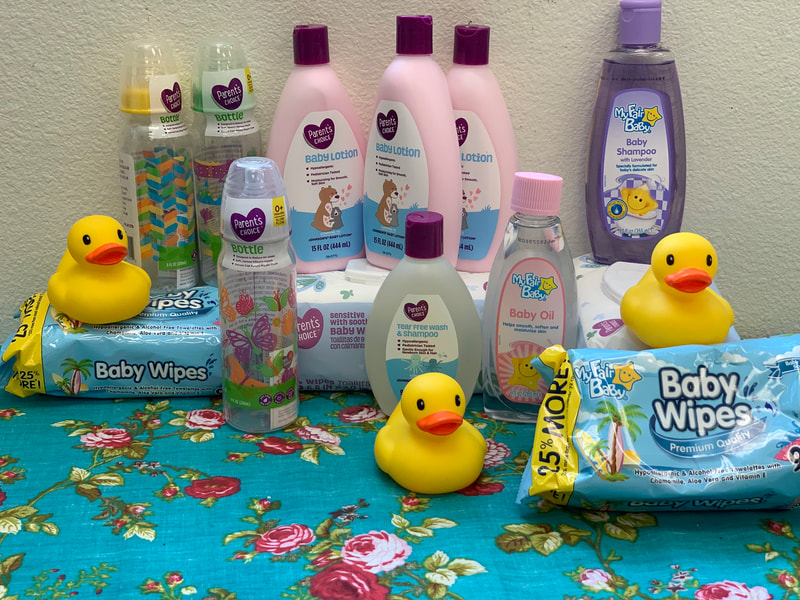 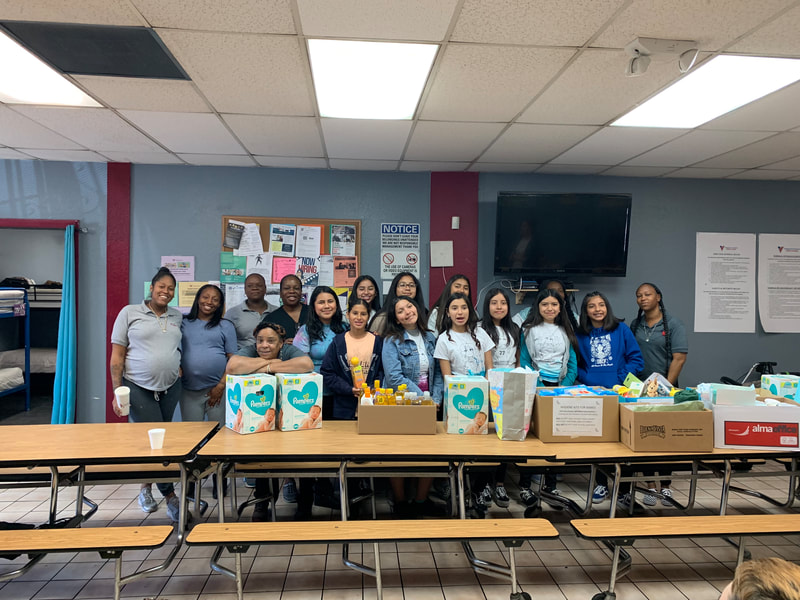 We held a school wide baby hygiene kit drive. We received over 250 donated items including baby lotions, diaper rash creams, pampers, baby wipes, rubber duckies, bottles and pampers. The items we collected were donated to, Center for Life Women's shelter which is the largest shelter for women who are victims of domestic abuse in South Los Angeles. Our donations directly assisted the 150 women who reside in the shelter.
Thanksgiving Canned Food Drive 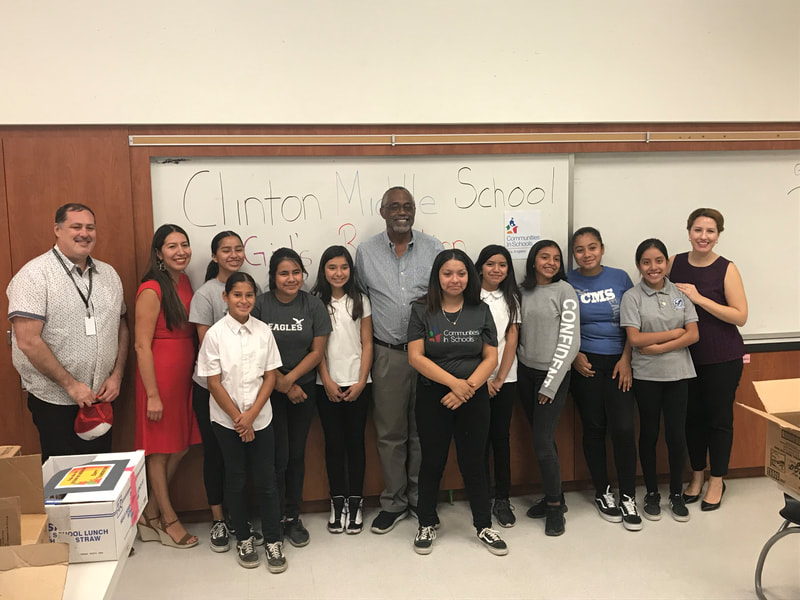 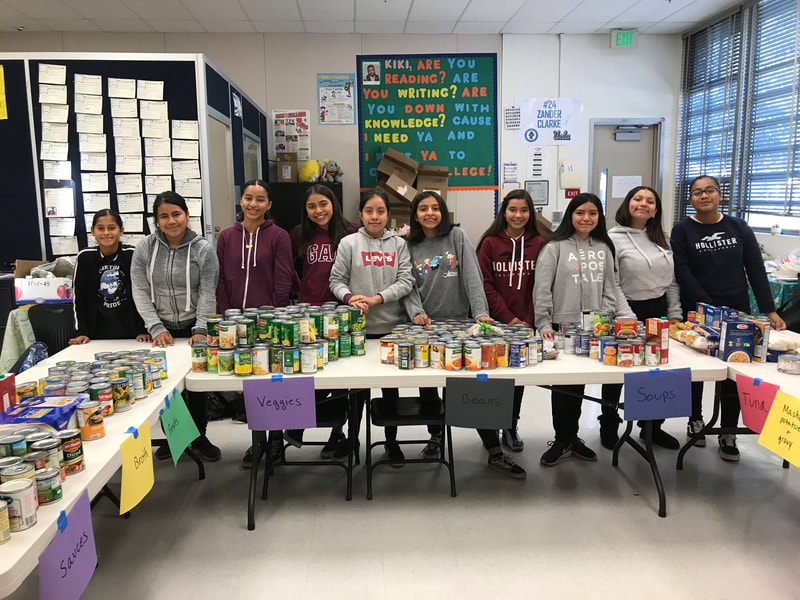 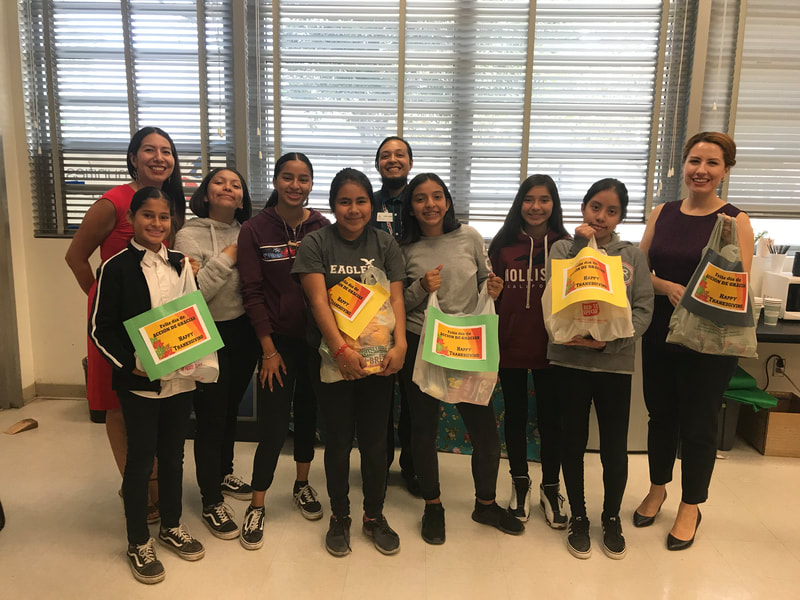 We'll be honest when we first decided to focus on helping one of the most vulnerable populations - homeless/at risk of homelessness we had no idea how many subpopulations it entailed. The homeless population encompasses women, children, babies, students, and veterans to name a few. We started thinking what if there was a homeless population within our very school community that we were unaware of, and if there was what could we do to help them for the holidays.

We decided to partner with our school's homeless liaison to see if there was a need and once we determined there was we wanted to ensure they had a Thanksgiving meal for them and their families this holiday. We just knew our fellow students would want to help, so we decided to host a month long canned food drive. As a group we targeted our Advisory classes going in and educating students on how they can help ensure our homeless families had a meal for the Thanksgiving holiday. We also reached out to local elected officials to see if they wanted to help out by donating items or turkeys. The office of Councilmember Curren D. Price donated 32 turkeys to our cause. We collected over 200 canned food items and together with the turkeys and some gift cards for families without access to ovens we were able to give away 36 Thanksgiving Meal baskets.
LGBTQ/Homeless awareness event 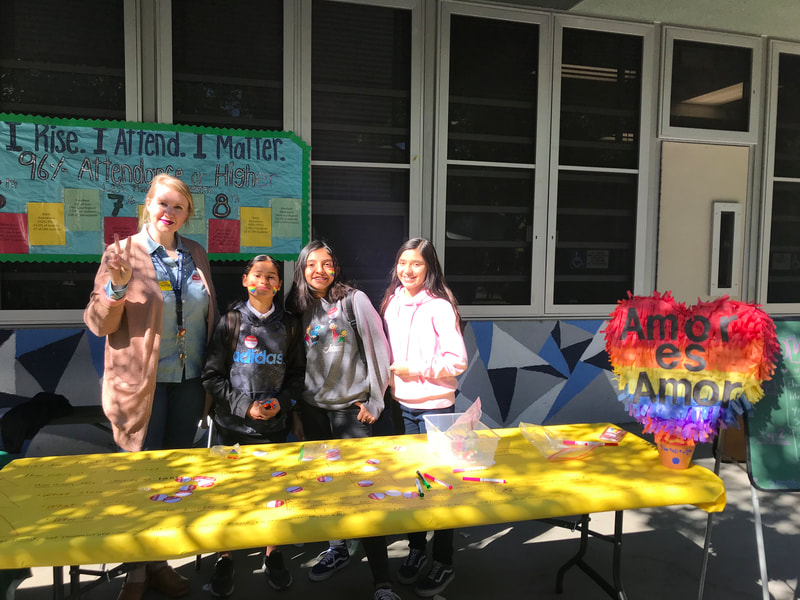 ​
During Valentine's week we hosted a lunch time event titled, "Love is Love/Amor es amor". Once we started learning more about homeless populations we were saddened to find out youth that identify as LGBTQ make up a large percent of the homeless youth population. Many LGBTQ youth often have to leave home due to not being accepted or are forced to leave home. We partnered with the Los Angeles LGBTQ center to help us bring awareness to this topic as well as share resources with our students and parents.
Red Ribbon Week -"Unwrapping myths of the homeless population" 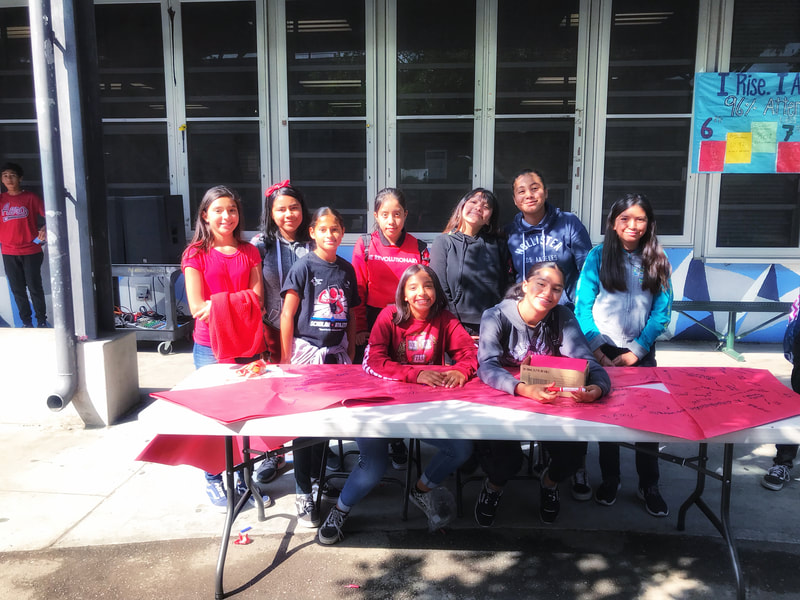 Today our group hosted a Red Ribbon Pledge to be drug free event during our school's lunchtime. It was one of many events we facilitated during Red Ribbon Week. We also partnered with several community organizations like Avalon Carver Community Center and M.A.D.D to bring awareness to our school community on drug and substance use.

Initially we thought there might be a connection between substance use and homeless populations but were surprised to learn that in Los Angeles a small amount of homeless individuals identified as having a substance abuse disorder (15% as identified in a recent  article by LAist  https://laist.com/2018/06/19/la_explained_homelessness.php). The article further found primary factors of homelessness in Los Angeles were poverty and high cost of living. It's expensive to live in Los Angeles, and it seems our community isn't being paid enough to afford living here. Maybe this is a larger conversation on education, job development, affordable housing, and poverty? Any other misconceptions you've heard regarding our community's homeless population?  ​
Classroom Advisory Presentations 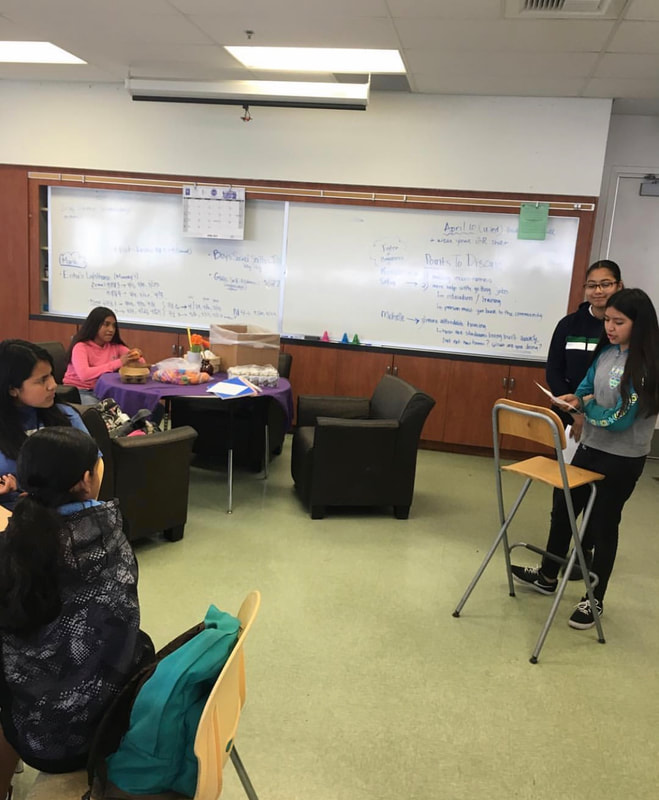 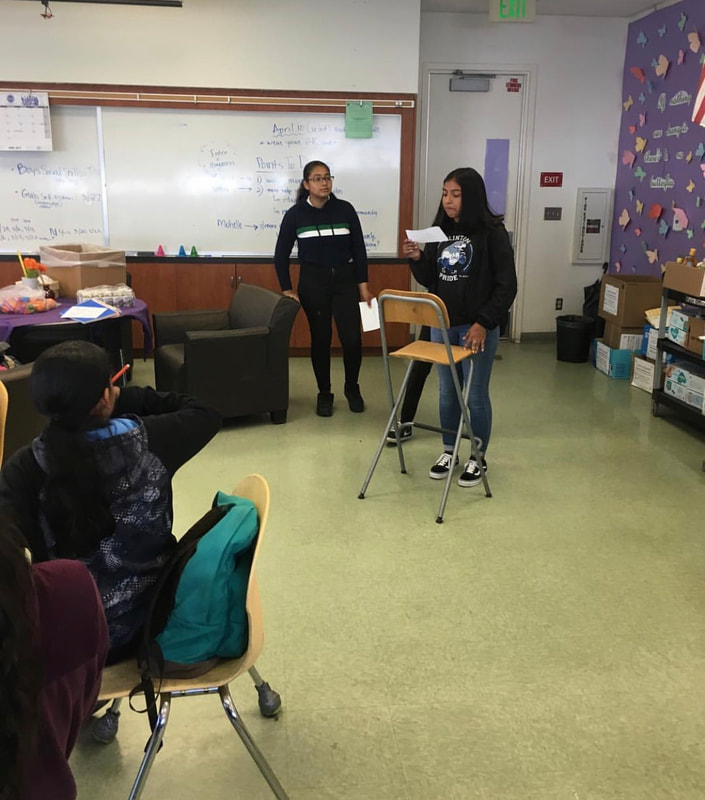 We did over 40 advisory class presentations to our Clinton Middle School community in order to provide education and awareness of issues that impact our homeless population. The majority of our team was afraid of public speaking before we started doing the in class presentations (and to be honest it still makes us nervous), but the more of them we did the more comfortable we felt. We also used the presentations as a way to help us prepare to advocate at City Hall.
Powered by